In recent years there has been widespread acknowledgement that the numbers of engineers leaving the workforce have far outstripped the numbers of new entrants.

To support IPWEA’s focus on engaging with younger engineers, a group of young members has committed to establishing a network for peers to initially share experiences, tell their stories and most importantly understand who their peers are. From this basis it is hoped that these younger engineers will be able to inform IPWEA on perceived barriers to attracting young people into the industry and assist in delivery of strategies to hurdle these barriers.

If either you are a younger engineer interested in getting involved or you know of someone in your workplace who may be interested please join us through the website or get in contact with Laura Currie on 02 8267 3001 or via email at laura.currie@ipwea.org. Joining YIPWEA means you can be a part of the most influential group of young public works professionals in Australia.

We aim to grow the skills, confidence, competence and influence of young Public Works Professionals, through:

What time and commitment is involved?

As much or as little as you would like!!

Each state has their own branch, where there are activities for participation. We are always looking for idea, as well as your help in spreading the work so our group can reach as many you public works professionals as possible.

Below are some examples of Young IPWEA NSW Members and what inspired them to become Engineers:

Age when started working in Public Works Engineering: 18 (First year out of School)

What got me interested in Public Works Engineering: When finishing up Year 12, I had been accepted into Wollongong University to study Civil Engineering. At the same time my local Council advertised a Civil Engineering Trainee-ship. Whilst the uni degree would have been completed in 4 years and given me a full bachelor’s qualification, the temptation to be working in a full-time position (earning money) whilst completing my studies (which Council paid for) was too great to pass up. By the time I had finished my first engineering qualification (Advanced Diploma) I had almost five valuable years working in the engineering industry on a very wide variety of projects for my local community.

I highly recommend a trainee-ship program to any future Public Works employee if the opportunity presents itself.

Interesting Projects I am working on, or worked on recently: I am currently working on the engineering assessment of a development application for the construction of a new township of approximately 3,000 people. Other interesting projects I have worked in local government include (but are definitely not limited to): Rural road, CBD car-park, river crossing and pedestrian bridge constructions; a former gasworks site remediation; developing asset registers; developing and maintaining GIS systems; and detailed survey and design.

One of the great things about working in the Public Works industry is the potential to gain experience on a wide variety of projects without becoming railroaded into a specialised field from the outset of your career.

Age when started working in Public Works Engineering: I was 19 when I first started working for Dubbo City Council (now Western Plains Regional Council). I was lucky enough to obtain a UNISS Scholarship which allowed me to gain 85 weeks of practical experience whilst I completed my Engineering Degree over five years.

What got me interested in Public Works Engineering: Being a Dubbo boy, having the opportunity to contribute to the development of my hometown was what encouraged me to apply for a scholarship with Dubbo City Council. When I completed my work placements throughout university, I gained a real appreciation for the wide variety of challenging work that a Public Works Engineer can be involved in, and made it easy for me to figure out what I wanted to do after university.

Throughout my eleven years in Public Works Engineering, I have been heavily involved in the construction of roads infrastructure, water infrastructure, sewer infrastructure, rail infrastructure, stormwater infrastruture, waste facilities, residential subdivisions, footpaths, cycleways and even some bridges. It is the variety of work that keeps me motivated and wanting to come to work every day. I am also lucky that my employer is very supportive of career development through further study, regular training and mentoring, and attendance art IPWEA meetings and forums.

Interesting Projects I am working on, or worked on recently:In my time as a Student Engineer and Project Engineer, I have been able to lead a number of major projects within the Dubbo Local Government area. The ones which stand out for me are:

– Dubbo Urban Stormwater Network Upgrade – involved installation of 800 metres of 1350 mm diameter stormwater pipe in trenches up to 7m deep through the Dubbo CBD. The project cost was $3.5 million, and was an IPWEA Excellence award winner in 2012.
– Talbragar Street Roundabout – involved the staged construction of a roundabout at a major CBD intersection. The challenges included maintaining traffic flow and satisfying community concerns. The project won an IPWEA Excellence Award in 2013.
– Troy Rail Deviation Project – a $7 million rail and road realignment project. Council undertook some of the works in building a railway line, which is something that we had never done. It was a great learning experience, and really highlighted the importance of engineering knowledge in major projects, and how political influence can actually cause more problems.
– Wheelers Lane Road Widening (currently underway)- a $2.5 million project involving widening of Wheelers Lane at the railway crossing to four lanes, dealing with John Holland Rail and the community. Wheelers Lane experiences traffic volumes of about 14,000 vehicles per day.
– Mitchell Highway Capstan Drive Roundabout (currently underway) – a $3 million project which involves the construction of a new two lane roundabout on the Mitchell Highway to service a future residential estate. 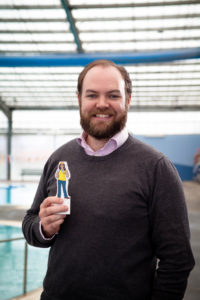 What got me interested in Public Works Engineering: My community has always played an important role in my life, something fostered by a childhood spent in a small, tight-knit community in the Blue Mountains. So I was always interested in doing something that would give back to my community, something in which I could be an active participant in the future prosperity of my community and make a difference.

At the same time, I always enjoyed building things and was fascinated about how things worked. I have early memories of not-so-carefully dismantling old electronics, only to be dismayed at how uninteresting it all was. But my crowning achievement of childhood was damning the creek at the back of my parents’ house to the point where I successfully surcharged the banks and flooded our yard.

Interesting Projects I am working on, or worked on recently:We’ve got a number of significant projects on the go at the moment and have just finished off some pretty incredible work considering the relatively small council I work for.

Finished just last year, the Byrnes Road Deviation project was a $1.5m deviation of an arterial road, on of our critical links to Wagga Wagga. The purpose of this project was to deliver freight and economic efficiencies to the region by removing a constraint on high productivity vehicles accessing a local intermodal freight hub. This project consisted of 1.3km of greenfield road construction, two new bridge structures, raising the road on average almost a metre and designing for road trains, all while maintaining traffic flow and without interfering with the adjacent Sydney-Melbourne Railway.

Another project was reviewing the solid waste services provided by the Council to the Shire, a community of over 5000 people. This review focused on the key elements of waste services: kerbside collection of waste, operation on the town’s landfill, operation of a number of rural transfer stations and the introduction of kerbside organics collection. This review turned around a business unit worth almost $1m and had been facing deficits into the future, to one with a financially sustainable outlook through a combination of efficiency, productivity and revenue measures.

Age when started working in Public Works Engineering: I started my career in Local Government in 2007 working for a small rural Council in Far North Queensland, I was 21 years old.

Interesting Projects I am working on, or worked on recently: We At Bankstown City Council I led and delivered the Closing the Loop Project. Closing the Loop is built around 4 interfaces that enables staff to effectively manage all aspects of the work order process including resource allocation, assets, customer and financial management.